The similarity score s(i, j) is calculated using -||xi-xj||² For s(i, i), we could fill them in with the lowest value among all cells.

In this formula, i refers to the row and k the column of the associated matrix. (All values for a is set to zero initially)

For elements in the diagonal:

Similarly, i refers to the row and k the column of the associated matrix.

The criteria score equals the sum of responsibility and availability:

Rows that share the same exemplar are in the same cluster.

It is also called bottom-up clustering.

A common way to calculate distance between two points is Euclidean Distance:

After calculating all pair-wise distances, we merge the smallest non-zero distance in the matrix as a new node.

There are lots of linkage strategies such as Single Linkage, Average Linkage, Complete Linkage, Ward Linkage.

Finding the Number of Clusters

After we get our dendrogram, we still need to choose a number of clusters since the dendrogram only demonstrates the hierarchy. Usually we could visualize the dendrogram and cut at the longest branch, or cut at branches that are longer than a specific value, but there are also some dynamic cutting methods.

A Clustering Feature (CF) is defined as a triplet (N, LS, SS), where

Before introduce how to build a CF Tree, there are some key concepts:

To form a CF tree, we have following steps: 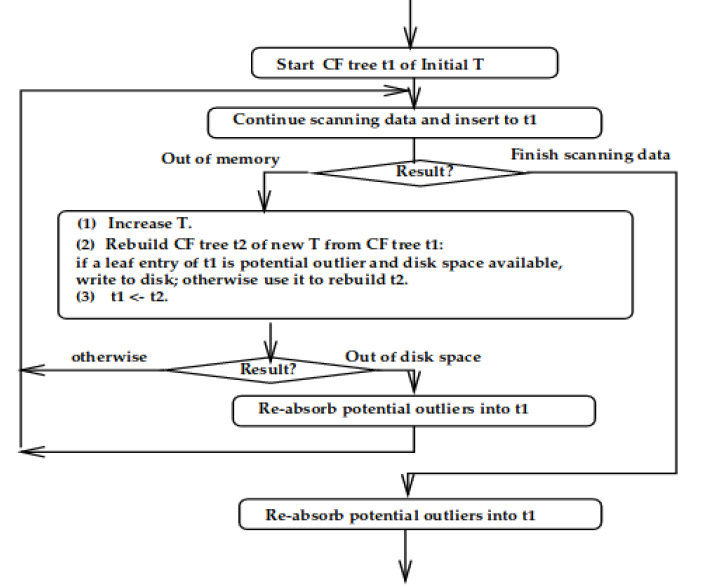 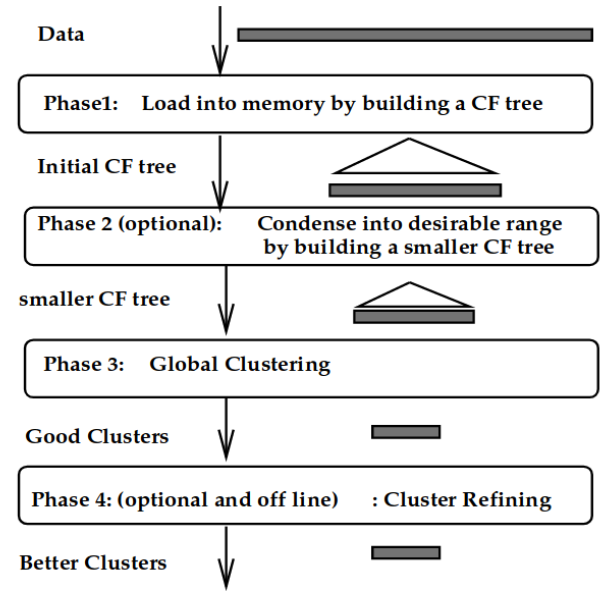 Although it is optional, phase 2 may work as a cushion to rebuild a smaller CF tree, removing more outliers and grouping crowded sub-clusters into larger ones.

Due to skewed input order and splitting triggered by page size, we may use a global or semi-global algorithm to cluster all leaf nodes. Almost any existing clustering algorithms could be adapted to work with sub-clusters. For sub-clusters, we can:

Phase 4 utilizes centroids of clusters produced by phase 3, and redistributes data points to the closest centroids. It guarantees all copies of a given data point go to the same cluster, correcting the inaccuracy caused by the algorithm. Besides, phase 4 could also discard outliers.