DBSCAN is short for Density-Based Spatial Clustering of Applications with Noise, which is presented in the paper A Density-Based Algorithm for Discovering Clusters in Large Spatial Databases with Noise.

DBSCAN works as below:

Unlike K-Means, DBSCAN does not need to specify the number of clusters. Besides, since K-Means forms clusters based on the mean value of cluster points, a slight change in data points might affect the outcome.

However, it is challenging for DBSCAN to deal with data points with unbalanced density due to the fixed epsilon.

Basically, given k as the number of centroids, K-means algorithm allocates every data point to the nearest cluster, while keeping the centroids as small as possible.

How to Determine the Optimal Value of K

I. The Elbow Method

Calculate the Within-Cluster-Sum of Squared Errors (WSS) for different values of k, and choose the k for which WSS becomes first starts to diminish. In the plot of WSS-versus-k, this is visible as an elbow.

The within-cluster sum of squares demonstrates the variability within each cluster. A cluster with smaller WSS values is more compact and has less variability.

To Calculate WSS, we calculate Squared Error, which is the square of the distance between every data point and it’s corresponding centroid, then sum up all Squared Errors as WSS.

For example, in the following figure, the elbow is at k=4. 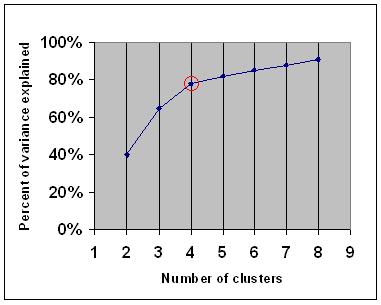 However, the curve could be much more ambiguous than this one.

In the paper Estimating the number of clusters in a data set via the gap statistic, Tibshirani et al. presented a method, that is called gap static:

Compute silhouette coefficients for each of point, and average it out for all the samples to get the silhouette score.

Using mini batches would save lots of time compared to K-Means, as not all data points would be included to calculate centroids in each iterations. However, sampling may also reduce the accuracy.